This is our mailbox. We watch it fervently. Delightful packages and letters come to it from all around the globe. There is something amazing , slightly romantic, antiquated, yet serviceful, pragmatic about the Post, and by extension…about the almost lost art of letter writing.

This came to our mailbox. If you should scrutinize the image carefully, you could read for yourself an address, and should you take it upon yourself to go there, you would meet a man named Mike.(Please don’t do this)

Mike is an exceptional human being. If Roald Dahl was to create a character that was at once witty, clever, smart, funny, kind, handsome with reliably good, yet sophisticatedly eclectic musical tastes, and should this character have a vintage couch with pheasants on it, and should this character be possessed of a great musical talent he abashedly deflects comment from, and this character was not a friendly giant( although apt to falling at concerts), nor a chocolate factory owner (although a very good cook and a dashing wearer of scarves), nor a giant peach (but actually, still quite fuzzy) , but , in fact a Mike…well…the real Mike would still be better.

When Josh first met Mike, he was offered a wallet size photo of Mike taken from the card, which he faithfully kept in the car visor, until it landed on our fridge, where it still sits. Mike also made Josh and I dinner, chicken and mushrooms, apologetically, even though we had really just dropped by. It was perfect.

It is not every man, who is comfortable giving another, newly met man, a wallet size picture of themself. But then, other men are not Mike. 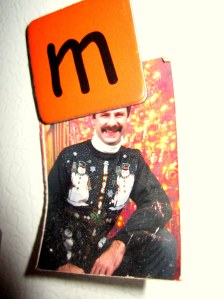 The next time we saw Mike, he told me he knew Josh was `the one`, because Josh had rinsed his plate after the aforementioned dinner. It is quite charming when men like Mike say `the one`, and then hug you too tight, and then put on Billy Ocean records.

This year`s card I won`t post, for fear of ruining the surprise for one of Mike`s many friends.

We have been waiting for it. It was worth it. Much love to Mike. And funny…but Post…is almost Prost.